USAT is famous for its trend stories, so it was noteworthy this morning when The Wall Street Journal chose an unusual forum -- its editorial page -- to pick apart one such USAT account about the Gulf Oil spill. 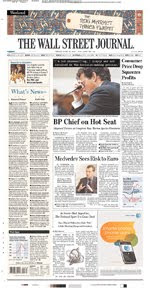 The June 8 story: "Oil spills escalated in this decade." The paper found the number of spills from offshore oil rigs and pipelines in U.S. waters "more than quadrupled this decade, a trend that could have served as a warning for the massive leak in the Gulf of Mexico."

Here's the graph the WSJ didn't like: "From the early 1970s through the '90s, offshore rigs and pipelines averaged about four spills per year of at least 50 barrels, according to the Minerals Management Service (MMS). One barrel is equal to 42 gallons. The average annual total surged to more than 17 from 2000 through 2009. From 2005 through 2009, spills averaged 22 a year."

"That sounds ominous," the Journal opines, "so we decided to check Minerals Management Service spill data and see for ourselves. Here's the rest of the story: While the averages reported by USA Today are correct, the paper failed to mention that the numbers were distorted by some outlier years, in particular 2004 (22 spills), 2005 (49 spills) and 2008 (33 spills). It's no coincidence that those were the years of Hurricanes Ivan (2004), Katrina and Rita (2005) and Gustav and Ike (2008)."

Now, depending on your perspective, the WSJ is providing important context that deflates USAT's trend discovery. Or, the Journal's famously conservative editorial page is once more kissing corporate butt.

Regarding a new plan to centralize digital content contracting, the well-known Gannett Blog poster known as "My Boss" says representatives of Gannett, USA Today and News Corp. have been discussing a possible combination of news, advertising and other content operations. News Corp.'s properties include The Wall Street Journal.

I have now confirmed that these talks have, indeed, been underway. I do not know their current status, however. (Updated at 3:58 p.m. ET to reflect my source's belief that these talks cover subjects beyond news content development.) Following are key portions of My Boss' post:

"This is the first step in the eventual News Corp. and Gannett/USA Today paid content agreement. There are some big implications for digital sales for newspapers and USAT. Jack Williams has been meeting with Jon Miller at News Corp. to discuss one delivery mechanism for all local content and for USAT to combine news operations within WSJ and sales within News Corp."

Some context: Any such deal with News Corp. would come amid USA Today's flagging circulation and advertising sales, which have lagged other Gannett newspapers as the U.S. economy struggles to regain its footing after the Great Recession.

Know about a reported USA Today staff meeting on Thursday? Please post your replies in the comments section, below. To e-mail confidentially, write jimhopkins[at]gmail[dot-com]; see Tipsters Anonymous Policy in the rail, upper right.

[van der Sloot]
Most popular right now on the websites of:

Slow traffic ahead: Memorial Day and the Internet 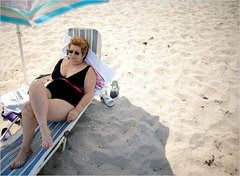 In my home state of Rhode Island, Memorial Day traditionally marks the start of beach-going season. Families head for the shore, opening beach houses for another summer away from scorching city temperatures. These days, I know something else that starts this three-day weekend: Internet traffic begins falling, and remains low during much of the summer, as more people vacation and stay away from the Web.

Please post your replies in the comments section, below. To e-mail confidentially, write jimhopkins[at]gmail[dot-com]; see Tipsters Anonymous Policy in the rail, upper right.

[Photo: bather at Pompano Beach, Fla., by Eric Thayer of The New York Times via Gawker]
at 12:00 AM No comments:

[Nelson]
Most popular right now on the websites of:

Major newspaper publishers's stocks are following overall stock markets lower, on renewed investor worries over E.U. debt. Recent trading in stocks I follow:
The Dow Jones Industrial Average is down 277 points, or 2.7%. The S&P 500 is down 33 points, or 3%.

The broad retreat is stocks, according to The Wall Street Journal, came on mounting worries over Europe's will to address its debt woes as unions went on strike in Greece and investors fretted that trading regulations like those introduced this week in Germany could be adopted in other countries.
at 12:39 PM No comments:

Labels: Stock, The Industry, This Just In

[Travolta]
Most popular stories right now on the websites of:

After falling 2% on Friday, NWS shares resume trading tomorrow morning as fear in the financial markets is building again -- this time over worries Europe's biggest banks face strains that will hobble European economies.

"Bourses and bank shares in Europe plunged on Friday because of these fears," The New York Times says, with Wall Street following suit.

Shares were also down in Tokyo and Australia in early trading on Monday. Hong Kong's Hang Seng Index fell 2.1% to 19,732.12, MarketWatch is reporting, falling back below the psychologically important 20,000 level; the Hang Seng China Enterprises Index lost 2.9% to 11,254.22.

I'm trying to earn $1,000 quarterly, mostly through contributions of $5 per reader; advertising pays only a fraction of that total. Don't like shopping online? Send contributions to Jim Hopkins, 584 Castro St. #823, San Francisco, Calif. 94114-2594

Where do you work?

News Corp. Blog at a glance. This site is on Eastern time, and has no formal affiliation with News Corp.

Jim Hopkins
I'm a former USA Today editor and reporter who blogged about Gannett and the news industry during 2007-2014.

I won't publish your name or other identifying information without your specific authorization.